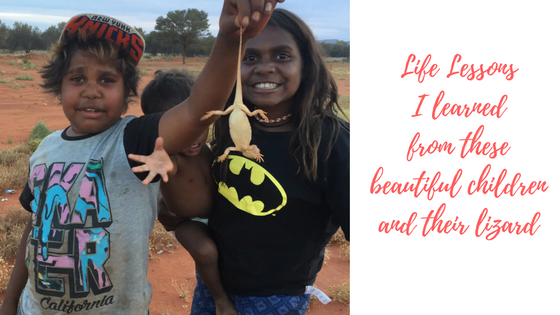 Last week, Rob and I, along with some friends had the privilege of spending time with some beautiful Aboriginal people in the middle of Australia. We flew into Alice Springs and began a fascinating journey. Two and a half hours of rugged travel, through the Outback to our destination. We were met by a wonderful man named Ken Duncan who’s passion for the Aboriginal people, in particular, the Haast Bungle is divine. KEN’s passion is driven by experiences he had as a child. His parents were missionaries to these people many years ago.

The town has a population of approximately two hundred people. It’s a “dry” community (meaning no alcohol), and as a result, there is very little trouble. The people are beautiful, and in the community, Ken is known as one of the family. This meant that we were accepted straight away.

Very quickly we fell in love with the Elders of the community. They are such hospitable, humble people dedicated to leading their people well. Alison, one lady that stood out right from the beginning, is a woman of strength, integrity and great leadership. She is an outstanding
Artist and each piece of her work can take up six to twelve months to complete. It was extraordinary to see her and her lovely husband in their studio, creating paintings that will be sent to an exhibition in an Art Gallery in Sydney where they will be sold. Her work is sought after by people all over the world.

We were very honoured to be able to cook dinner for around sixty people the first night we were there. The Elders came first and then one by one they all turned up out of nowhere. Some sat around the table, some on the floor and some outside under the stars. Of course, the children stole our hearts. We had so much fun with them, and I loved how they all were so respectful of the older people. I have come to the conclusion that children are children and no matter where they live there isn’t much difference between them all.

When I visit India or Bali the girls love to get into my makeup, and it was no different in the Outback of Australia, they soon asked if I had makeup and could they see it. We had so much fun as they were making up my face making me look what they thought was beautiful. My makeup, of course, took a bit of a beating but it was all worth it to see the joy on their faces as they had fun experimenting.

Myra, one of our friends that were with us, let the girls use her phone to take photos. They had so much fun seeing themselves on her phone. Again, this is much like our time in Bali, Jakarta and India. Of course, the boys had to be real boys, and they got into all sorts of mischief like boys from all over do. One little boy, just a Toddler of around eighteen months or so, was doing his best to keep up with the bigger boys. He reminded me of my smaller grandsons try and keep up with the older ones. It was fun watching them digging up plants to find lizards that live in the cool of the roots beneath the red sandy soil. They were ingenious and crafted at this exercise, they could tell the “entry point” and the “back door” as they called it just by looking at the markings around the plant, the girls were a part of this fun too. They would dig from the entry point and be prepared to catch the lizard as it tried to escape through the hole that was the “back door.”

They would then grab the lizard and tease it by picking it up then putting it down out in the open and chasing it as it tried desperately to escape. As I said, boys just have to be boys wherever they live, no matter the age or the surroundings. Fortunately for the lizard, Ken stepped in after they had been playing for some time, and they left it alone so it could go off and be safe and live another day.

The thing that amazed me the most in this exercise was the little toddler; he was such a character and very determined that he was not going to be left out of any of the action even though he was so much younger than the other boys. Most of them were between five and twelve years old. Of course, they were faster than him, they were able to dig with a bigger spade, and they were all more experienced, but that meant nothing to him, he was always right in the thick of it all. Not only was he so little, but he also had, in the scurry of all the fast action, stepped on a plant that had horrible, painful spiky thorns all over it and his tiny little right heel was covered in them. There was no indication from him that he was in any pain at all, but he just had to be as Myra and myself were pulling them out of our clothing all through the day. They caused us so much pain when they got caught in our shoes or our trousers I couldn’t imagine they weren’t bothering him. I picked him up, and Myra very carefully pulled the spikes out one by one hoping they wouldn’t stick in her fingers but of course they did and they caused her nasty pain. As I put him back down, he just ran off with no fear at all and as fast as his little legs could carry him. He wasn’t going to let this slow him down. There was no time to worry about any pain that was felt; he had serious business on his mind. He wanted to catch himself a lizard just like the big boys.

Myra and I were amazed; we couldn’t imagine how any of the toddlers at home could bear such pain with no sign at all of slowing down in whatever they were endeavouring to do. I mentioned it to one of the Elders Gordon, and his reply was, they have to toughen up to survive the conditions in which they live. They learn to deal with the harsh conditions, so their feet toughen up to cope or else they will be in pain too often as there are so many of these spiky plants growing everywhere.

This made me think how at home try to protect our little ones from pain rather than teaching them how to handle pain. Too often we run to their rescue to prevent them from the pain of all sorts whether it be physical or emotional instead of helping them work through it. I am not saying we should just let them go and neglect them, however, I do think we often don’t let them feel any pain at all and then wonder why they can’t handle tough situations well as they grow.

These beautiful Aboriginal people are so very loving and caring of all the children in their community, and yet they teach them how to toughen up and not let pain stop them. This little fellow was having the time of his life, chasing lizards, digging holes and eating watermelon all at once and it was beautiful to see the freedom and joy he as enjoying.

After seeing this, I want to encourage all of us to stop trying to over protect our children and grandchildren. Rather, let’s teach them to work THROUGH pain so they can be empowered to do life well. Of course, we need to protect them from danger. However, we also need to teach them how to handle risk too, so they don’t stop when things get hard.

Our new friends in the Outback aren’t perfect in their parenting either; I am aware of that, but I can see there is something we can learn and certainly something to think about. Let’s love our children and grandchildren while empowering them to handle the tough things in life well, recognise pain, acknowledge it and give them the tools to be tough enough to work through it all well and not be stopped by any obstacle in their way.

Lastly, make sure you stay tuned to all things Little Miracles either by following us on Facebook or Instagram #littlemiraclescommunity.