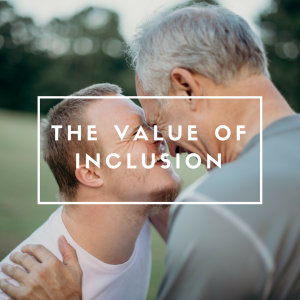 I wanted to share a beautiful and heart-warming video and story that I stumbled upon this week. Frank Stephens has met Barak Obama at the White House, a runway model for the Global Down Syndrome Foundation, has written and starred in films, is a Special Olympian and disability advocate who recently addressed the United States Congress.

I am saddened that these incredible members of society and others constantly face struggles and are fighting to be valued and included. Below is an excerpt from Frank’s powerful speech.

Seriously, I don’t feel I should have to justify my existence, but to those who question the value of people with Down Syndrome, I would make three points.

First, we are a medical gift to society, a blueprint for medical research into cancer, Alzheimer’s, and immune system disorders.

Second, we are an unusually powerful source of happiness: a Harvard-based study has discovered that people with Down Syndrome, as well as their parents and siblings, are happier than society at large. Surely happiness is worth something?

Finally, we are the canary in the eugenics coal mine. We are giving the world a chance to think about the ethics of choosing which humans get a chance at life. So we are helping to defeat cancer and Alzheimer’s and we make the world a happier place. Is there really no place for us in the world?

It saddens me to think that for some reason, when faced with difference most humans will shy away. We fear the unknown rather than embrace it and learn. We retreat to our places of safety and where we feel most comfortable rather than allowing ourselves the freedom to truly live and learn from the world and those around us. Often, we base ideas and come to conclusions on appearance rather than valuing one another and investing time to listen, learn and discover.

The beauty of Frank is that he bravely allowed us the opportunity to hear from a somewhat silenced community. I find it a little ironic that we are hearing this message of inclusion from Frank when (as stated above) Down Syndrome people are known to be kind, loving, funny, welcoming and very accepting of those around them. Yet here, we listen to an articulate man sharing his own experience about exclusion.

Imagine feeling excluded. Take a moment and imagine Frank’s life. Maybe you, yourself have felt this level of exclusion, maybe it’s not knew to you. If this is something you’ve known then I pray you have found your tribe and you now know experience inclusiveness. At Little Miracles we try and do our best to make everyone know and feel valued. Our culture of honour is a huge part of this and we stand on that all the way from our admin team through to our educators and children. Value and Honour, two incredible words that can and do change lives.

Now, imagine a world where everyone is included regardless of appearance, genetic makeup, gender, race or religion. What an extraordinary world that would be. A pipe dream some may say but one that I believe can be realized if we begin with us. Together we can make a difference by simply accepting one another for who they have been created to be. Let’s start today. Let’s listen, embrace and love in a new way.

I pray that Frank’s words encourage you to be bigger, love wider and share joy throughout your communities.

“God didn’t put me in the world to increase suffering. He put me here to increase acceptance. My life is worth living.” – Frank Stephens.

Watch his full video below.