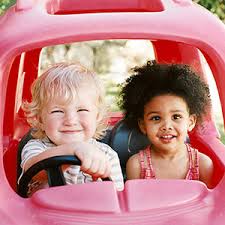 My daughter turns 2 next week and there has been much discussion (mostly generated by my 3yr old) about her party.  She has been helping to make her guest list and has proudly been giving out invitations. I asked her if she would like to invite any friends from daycare. She immediately rattled off a list of 5 names. Two were teachers, three were other children.  I checked with the teachers as to whether these children were in fact in her class and then asked if my daughter played with them. The consensus was she did, but no more than any other children. I wasn’t sure what to do then, did I invite them? Has she just said their names as they were the more outgoing kids?  I asked a friend who is a parent their opinion and was told I was mad for even asking a 1yr old who she wanted to come.

My decision was to invite them. Who cares if they think they are friends? My daughter thinks they are and that is what is important. What she wants matters. My decision was justified, when I told her this morning that one of them has told me they are coming her smile couldn’t have been bigger.

Young children may not have the same kind of friendships as older children or adults but this is how they learn. Give them the opportunity to develop these important social skills. Whether they get to choose someone to invite on a playdate or to a party or even if it is just encouraging them to respond to other children at the park these are all valuable learning experiences. Just take your child’s lead; they know what they are comfortable with.  As long as they are allowed to be in situations and settings where they get to interact with other children they will learn. As a parent one of the best things you can do is facilitate this and also acknowledge and respond to your child’s thoughts and feelings.