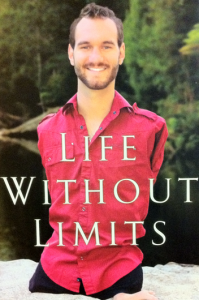 “The only person you are destined to become is the person you decide to be.” Ralph Waldo Emerson

I saw this quote and straight away I thought of an amazing young man who has no legs and no arms. He has a torso and one flap on one side of his torso that resembles a foot. His name is Nick Vujicic, and he has written a book called ‘Life without Limits‘ He is one person in the natural you could easily believe doesn’t have much to look forward to in life. It would seem to most that it would be impossible for him to have much of a destiny at all, and yet this young man has achieved much more than most able bodied people including myself.

This man just blows my mind, it almost seems unreal as you watch him. He obviously has help from people, but his belief in his potential and future is just outstanding. He lives a life full of hope and joy, his achievements are enormous, it just leaves me dumbfounded when I learn all he has achieved.

The list of what he’s able to do is enormous and includes; surfing, snowboarding and so much more. I strongly encourage you to investigate and share with your family. He is one of the most inspiring people I have encountered. I’ve been told that when he speaks to students he talks about having a bad day and that if anyone was allowed to have a bad day it would be him. But, he chooses not to, and he speaks openly about how he makes his way through those moments in life.

Nick was born in Australia; however, he lives in America now and I first heard about him when I saw him on T.V a few years ago. When I saw and heard him, I was captivated, and I found it hard to believe at first but the evidence is there in front of you. He’s there, speaking and sharing his truth. Following my first glimpse of him, I bought his book and couldn’t put it down as it was so compelling to read.

Again, I would suggest that all parents buy it and read it yourself and allow Nick’s story to awaken your potential. Let the story to stir you up so that you can deposit that belief of limitless potential into your children.

Understanding and helping our children walk in their full potential is a very delicate balance. A starting point always has to be our honest motivation and our ability to believe for the best result, knowing deep within us they are full of potential.

I can remember my mum and dad always spoke of my potential and believed without a doubt I would achieve well in life. Let me share a short story with you. When I was in High School, my Headmistress of decided to tell me where she expected me to end up. This ‘telling’ didn’t sit well with my lovely mother. It wasn’t an encouraging ‘end’ to my life story. So, my Mum told her exactly what she thought of her comments and that was that she apparently didn’t know me or my potential. As far as mum was concerned I would become a woman of worth and achieve well. Now, in saying this, my mother made sure the teacher wasn’t trying to discipline me. My mother always supported the teachers in that because sometimes I needed it. Plus, my mother always gave me the appropriate punishment when I was in trouble at school, she didn’t let me off the hook. There were always consequences to my actions. However, my mother always believed in me and declared that I would amount to something and so I believed it too. I have a good friend, Susan Sohn, who tells of her mother and I quote her ‘She spoke potential into me and caused me to see it for myself’.

What we expect of our children’s future is what they will usually become as adults. So, be careful of your expectations, lift them high, for yourself, your spouse and your children and you will be surprised what will be the result. When you believe in your children, it won’t matter what other people say to them or about them because their future is secure. Professionals and friends can say what they like, your child will believe you above them. You have the biggest impact on your children’s destiny, not them.

Nick, the young man I spoke of above, was born with what looked like huge limitations. I can only imagine how all the staff in the hospital probably thought he wouldn’t achieve much. I wonder if his parents were devastated? I can’t even begin to understand what it was like for them. I do know that they must be amazing people with great strength and determination. Parents who vowed that they would never giving up on their son.

I want you to try and imagine what their situation must have been like. What others must have been saying and speaking over their precious baby boy. Their strength inspires me. They would have questioned what his life would or could look like. There would have been so many questions dancing around in their minds. They were determined to give him a normal life, a new normal. From that love and dedication that wee baby who was born with some of the greatest challenges was blessed with parents who could see beyond the physical. They could see the potential of what could be and who he could be.

As I listen to Nick speak and read his words, it’s apparent to me that his belief in his potential had an excellent foundation and he has lived what is truly and extraordinary life. Again, I encourage you to google him, to click the link I’ve provided above and to learn about his incredible story.

Every parent who has children, able-bodied or disabled, with or without learning difficulties should read this book and read it through with your children. Teach them to take the limits off that life and people love to put on us.

I must tell you that faith plays a part in his journey. It has in mine and my family as well. I believe the creator has filled every one of us and our children with potential beyond our dreams. Believe in your potential and believe in your children’s potential no matter what the circumstances.
Decide who you want to be and go for it. Give your children permission to dream big and decide what they wish to achieve in life. Then, believe it with them and enjoy the ride.